The Swiss mainstream media and the major rally in Bern

When several tens of thousands of people demonstrate against the tightened Covid law, the mainstream media deliberately speak of only "several thousands". We estimate that more than 50,000 were present at the rally and a conservative-minded scientist at the University of Bern also counted more than 30,000 people.

On the 23rd of October the federal city of Bern experienced one of the largest political rallies in a long time. People of all ages and political colours demonstrated peacefully against discrimination and the tightened Covid law. Bern's city centre was overflowing with people. The Bundesplatz was so full that the police felt compelled to inform the public to refrain from streaming in front of the Bundeshaus further. The crowd also filled the Casinoplatz and Münsterplatz as well as Herrengasse and other pedestrian zones in Bern's city centre. 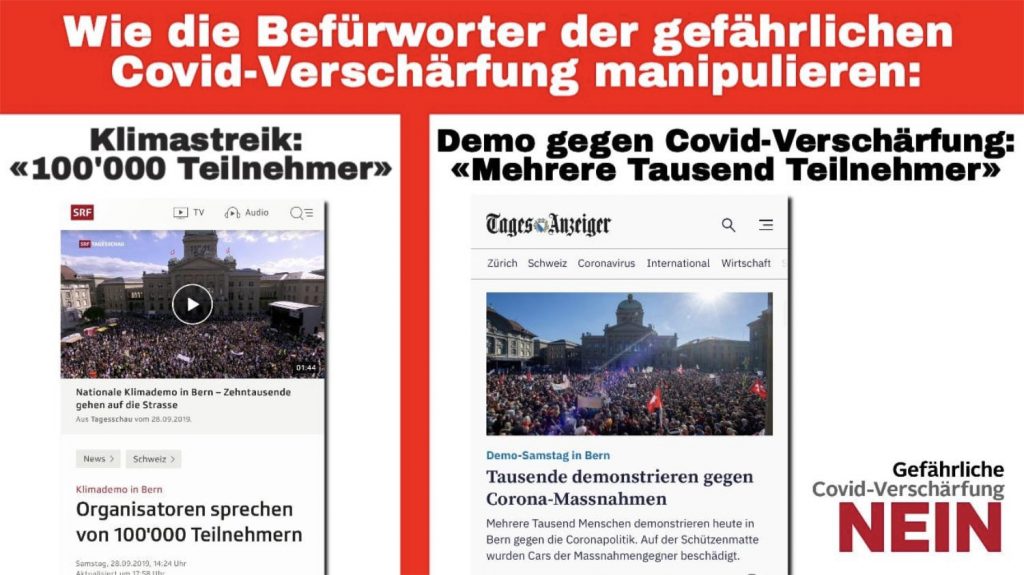 And how do the major Swiss media report? If at all, they only write about "several thousand". Nebelspalter already pointed out this glaring journalistic blunder on the afternoon of the event on the 23rd of October. Since then a lively debate has broken out about it. Although the facts are on the table and the blunder of the mainstream and corporate media is obvious, three days after the event, the "Tages-Anzeiger" continued to focus on the false report of "several thousand" demonstrators.

The conclusion is as follows: Corporations that produce such politically motivated misinformation should not be supported in any form. They are servants of the people who are responsible for the disastrous Corona policy!