The Association defends and strengthens the position of the Sovereign in the Constitution of the Swiss Confederation. In doing so, it is guided by the Preamble of the Federal Constitution and the Charter of the Association.
The association does not represent any particular interests and does not pursue any commercial goals. The or- gans are active on a voluntary basis.

The association has the following means at its disposal for the pursuit of its objectives:
- membership fees
- Donations and contributions of all kinds
- Income from own events and sales
The funds serve exclusively and irrevocably the purpose of the association.

Natural and legal persons who support the purpose of the association can become members.
The annual membership fee for natural persons is CHF 50, for legal entities CHF 500. Higher contributions are welcome and will be booked and confirmed as donations.
Applications for admission are to be sent to the office; the board decides on admission.

A withdrawal from the association is possible at any time by notification by letter or email and becomes legally effective by confirmation by the office. In case of notification by registered letter, it becomes effective immediately.
A member can be excluded from the association by the board of directors at any time without giving reasons. The member may refer the exclusion decision to the General Assembly. In this case, it only comes into force after the decision of the General Assembly.

Organs of the association

The organs of the association are:
(a) the general meeting
(b) the Management Board
(c) the auditors
(d) the Secretariat

The highest body of the association is the general meeting. Ordinary general meetings take place in the first half of the year.
Members shall be invited to the General Meeting in writing one month in advance, stating the agenda items. Invitations sent by e-mail are valid.
Requests for the inclusion of items on the agenda of the General Meeting must be submitted in writing to the Board of Directors no later than six weeks before the General Meeting.
The Board of Directors or 1/5 of the members may at any time request the convening of an extraordinary General Meeting, stating the purpose. The meeting must be held no later than two months after receipt of the request.

The General Assembly has the following inalienable duties and powers:
a) Approval of the minutes of the last general meeting
(b) approve the annual report of the Management Board
c) Receipt of the auditors' report and approval of the annual financial statements
d) Discharge of the Executive Board
e) Election of the Board of Directors and the Auditors.
f) fixing the membership fees
(g) approve the annual budget
h) Adoption of resolutions on other business brought forward by the members or the Executive Board
i) Amendment of the Articles of Association
j) taking note of and deciding on the expulsion of members.
(k) take note of the programme of activities
l) passing resolutions on the exercise of popular rights, in particular the taking of referenda and the launching of popular initiatives
l) Passing resolutions on the dissolution of the Association and the use of the liquidation proceeds.

Any General Meeting duly convened shall constitute a quorum irrespective of the number of members present.
The members pass resolutions by simple majority.
Amendments to the Articles of Association require the approval of an absolute majority of those present.

The Board of Directors

The board of directors consists of three to nine persons.
The Board of Directors manages the day-to-day business and represents the Association externally. It may appoint specialist groups and shall issue the regulations applicable to them.

The Secretariat shall be responsible for membership administration and shall carry out assignments referred by the Board. The secretariat is remunerated according to need

The association is bound by the collective signature of two members of the board.

Dissolution of the association

These statutes were adopted at the founding meeting on 23 July and came into force on that date. 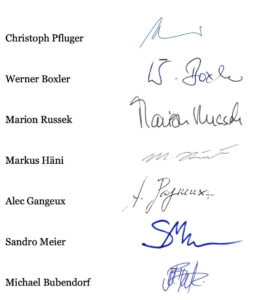 Every new member strengthens the democracy!

Stay up to date!

There is nothing good unless: you do it!

We Friends of the Constitution finance our activities largely through donations.