Our rule of law is eroding!

We live in dire times. Society is divided: Some do what the state tells them to do and hope that this will finally put an end to our "pandemic". The others are less willing.
They feel bullied when the state prescribes them a "vaccination" without it having been carefully examined. This group is currently excluded from public life and finds it increasingly difficult. 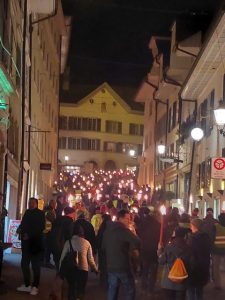 But we live in a democracy. In a democracy, citizens are allowed to express their displeasure. For example, with a demonstration or a torchlight procession. This is what happened recently in Solothurn. More than 300 people got up and gave a face to their displeasure. That is their right. And the right must be protected in a constitutional state.

Of course, everything had been agreed with the authorities. About 20 police officers were deployed to protect them - something which comes naturally. What was less obvious was that this crowd of people, all from the centre of society, were not allowed to walk through the old town. A place where as many people as possible could have seen that there are some who do not agree. A torchlight procession is done to make oneself heard and to be seen. Not in secret.

Very well. They were granted another route a little off the beaten track. A minor detail. The demonstrators had to cross a narrow pedestrian bridge. An ideal place to disrupt the torchlight procession. The police knew that. They even pointed this out. Why then did the group of people have to go this predefined route?

And then: to who's surprise? Our demonstrators were "expected" at this very point by a few, or more precisely 8 masked people. Mind you, the police were there with 20 officers. 20 against 8 should not be a problem. But it was. The hooded people prevailed, our peaceful demonstrators had to turn back.

No one from the black block was reported. This disruptive action had no consequences for anyone!
How can that be? There is only one explanation: the police are on the wrong side. They support the violent, those who disregard our laws. They no longer ensure law and order.

Our rule of law is eroding!