The Federal Council and Parliament
are deceiving its Citizens

Petition for a fair vote 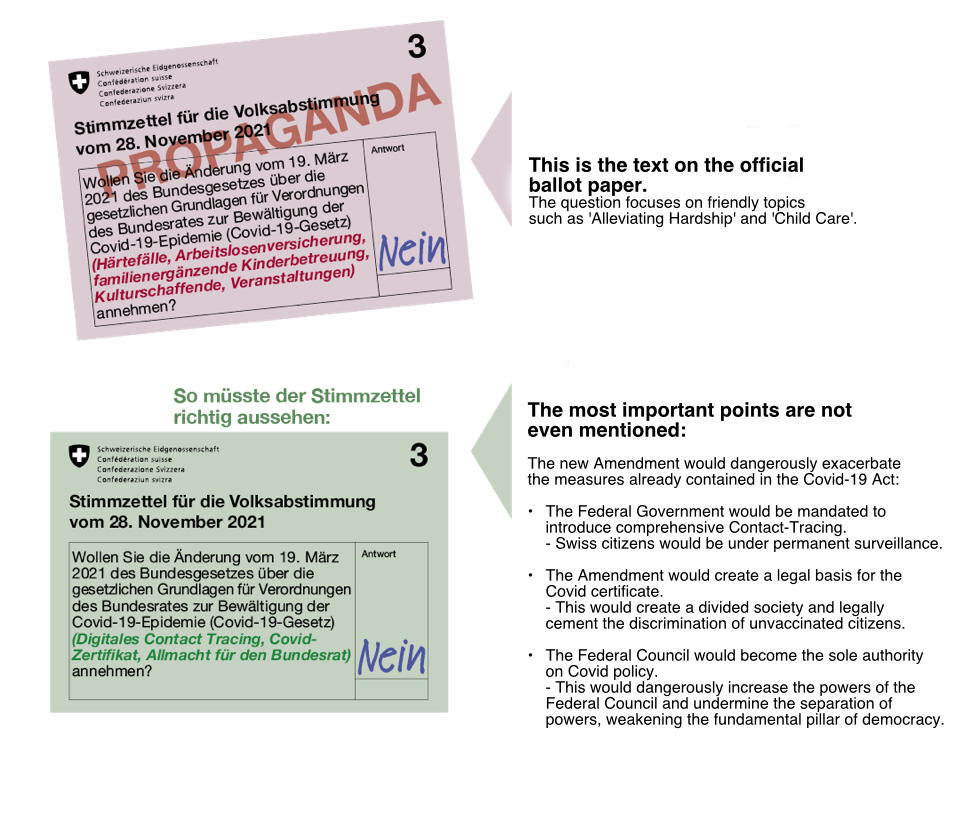 1. We demand a neutral wording of the ballot question!

The question on the ballot paper concerning the Covid Act is manipulative. The advocates' arguments have been directly incorporated into the wording. Politically and socially significant arguments of the opponents have been completely ignored. This type of manipulation distorts voting behaviour and is unworthy of a direct democracy.

2. We demand an equal distribution of print space for advocates and opponents and an impartial informative section!

The Federal Council and Parliament have been given a disproportionate amount of print space in which to present their arguments in the voting information pamphlet, compared to the Referendum or Initiative Committee.

3. We demand that there should be no voting recommendations on the back of the voting information pamphlet.

In future, the Federal Council and Parliament should refrain from making recommendations on the back page of the pamphlet. Due to the prominence of the Councillors, this has an undue influence on public opinion and creates a bias in citizens' perceptions. Whenever a referendum or an initiative is launched, there is a clear wish on the part of the citizens for political participation and/or the citizens are not in agreement with the laws proposed by Parliament.

We demand our constitutional and legal rights with this petition!

Thank you for joining us.

Comments on the ballot question:

"This is the biggest, manipulative misleading of the voting citizen that I experience. This is a scandal! The text on this ballot paper: massively misleading, massively one-sided, massively manipulative. Not one syllable mentions the Covid certificate. This text is a disgrace for the Swiss Confederation!"

"At the beginning of August 2021, the Federal Supreme Court dismissed all voting appeals on the first referendum of 13 June 2021 as inadmissible because the explanatory statements on the vote could not be directly challenged in court. This opens the floodgates for manipulations of all kinds. The Federal Council is exploiting this legal leeway without restraint in order to advertise in a misleading manner the new provisions in the Covid-19 Act, which are unlawful and unconstitutional. Contrary to Art. 34 of the Federal Constitution, a free formation of will and an undistorted casting of votes is thus not possible. The Federal Council's action massively violates the principles of the rule of law (Art. 5 BV). This is a scandal of the first order in terms of constitutional law and democratic politics.

"This referendum question is an unparalleled sham. I don't understand how something like this is possible in Switzerland, the model democracy. It is obvious that they want to achieve a yes vote by all means, including deception.

Sandro Meier, Economist, Board Friends of the Constitution:

"With this referendum question, Switzerland degrades itself to the level of a banana republic. Obviously, marketing for a bill starts with the name of the bill."

"Misleading and manipulative, the voting question.
No unemployed person will lose even one franc of daily allowance if we vote NO, but they will be spared surveillance and a two-tier society".

"I never imagined that a ballot paper in Switzerland could be so misleading!

Our democratic processes are dismantling themselves: this tactic of deceiving the voters is far from transparency and fact-based information.